Hundreds of deaths, dozens of abductions / Break the silence on Kashmir! 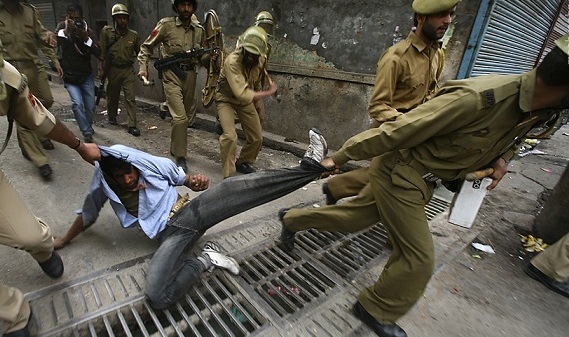 The Basij student association of Imam Sadiq University has issued a statement condemning the recent deaths of protesters in Kashmir and also expressed its solidarity with the people of the region on behalf of Iranian students.
In the name of God, the Compassionate, the Merciful
Unfortunately we have learned that Kashmir has once again been the scene of senseless killings of innocent civilians by Indian forces. In the face of all of this, we have seen the people of Kashmir responsibly protest and demand change. It is unfortunate to see that the Indian government is not only not behaving in a responsible way but is treating its Muslim population of Kashmir with abhorrent savagery and violence. We have become accustomed to hearing of high death tolls at protests and police curfews in Kashmir at a yearly basis. The Muslims of Kashmir have been the target of numerous acts of killings, abductions & disappearances, torture and rape.
In the following lines follow some of the atrocities which the innocent inhabitants of Kashmir have faced and this letter of solidarity condemns. We urge for serious measures to be taken to avoid more of such atrocities.
-Human rights reports indicate: Indian security forces have “assaulted civilians during search operations, tortured and summarily executed detainees in custody, abducted and murdered civilians in reprisal attacks” & that “ Indian authorities use Armed Forces Special Powers Act (AFSPA) to avoid holding its security forces responsible for the deaths of civilians in Jammu and Kashmir.”
-Diplomatic cables obtained by WikiLeaks revealed that the use of torture against hundreds of detainees in Kashmir has had widespread use.
-An investigation by the Jammu and Kashmir state human rights commission has found 2730 bodies in unmarked graves at 38 sites in northern Kashmir. At least 574 of these were identified as being local people.
Some of the most tragic days in Kashmir:
– The Gawkadal massacre Indian paramilitary troops of the Central Reserve Police Force opened fire on a group of Kashmiri protesters. At least 50 people were killed (according to survivors, the actual death toll may have been as high as 280)
– The Zukoora and Tengpora Massacre was the killing of protesters in which 33 people were killed and 47 injured.
– The Kunan Poshspora incident occurred on February 23, 1991, when units of the Indian army launched a search and interrogation operation in the village of Kunan Poshpora, located in Kashmir’s remote Kupwara District. At least 23 women were gang raped by soldiers that night. However, Human Rights organizations including Human Rights Watch have reported that the number of raped women could be as high as 100.
– Sopore Massacre refers to the alleged killing of 55 Kashmiri civilians by the Indian Border Security Force in the town of Sopore in Kashmir on 6 January 1993.
– The Bijbehara killings, in which the Indian military fired on a procession and killed 40 people and injured 150.
-As a response to the Indian government’s discrimination against Muslims, Kashmir saw one of its biggest protests in 2008. More than 40 unarmed protesters were killed and at least 300 were detained as a response.
-The 2010 Kashmir unrest was series of protests in the Muslim majority Kashmir Valley in Jammu and Kashmir which started in June 2010. The Jammu and Kashmir Police and Indian para-military forces fired live ammunition on the protesters, resulting in 112 deaths.
– July 2016, more than 30 protesters were killed and 300 injured in clashes by the Indian security forces within four days.

اصغری, [۱۷.۰۷.۱۶ ۱۲:۵۲]
As Iranian students, we declare our support and solidarity with the people the fellow Muslim people of Kashmir. The news of more bloodshed in Kashmir has saddend many of your Muslim brothers and sisters around the world, specifically in the Islamic republic of Iran. We call on all our fellow Muslim brothers for a united stand as Imam Khomeini once said: “Isn’t it so, that if a united Muslim front had been formed, no one would have dared such abuse and persecution against the spiritual descendants of the Prophet (PBUH)?!”
Basij of Imam Sadiq University